New York lawmakers and climate advocates today will kick off New York City Climate Week by calling for new statewide action to better monitor and test for per- and polyfluoroalkyl substances, known as PFAS and “forever chemicals,” which have been linked to a myriad of health conditions, including hormonal changes, developmental delays in children and increased risk of cancer.
Sen. Rachel May (D-Syracuse) and Assemblymember Carrie Woerner (D-Saratoga County) will unveil their “PFAS Surface Water Discharge Disclosure Act,” at a late-morning news conference featuring officials from Earthjustice and Seneca Lake Guardian and other lawmakers. The legislation (NY S9525)/(NY A10689), which was formally introduced last month, would create an annual PFAS surface water discharge disclosure requirement for all publicly owned treatment works and new state pollutant discharge elimination system permit applications.
May told POLITICO that the legislation stems from her recent work as part of an Environmental Protection Agency local government advisory council on federal PFAS rulemaking.
“What we realized in New York state, as well as [in] lots of parts of the country, is no one has any data about where these chemicals are, where they’re coming from, how big a problem it is in local areas,”she said in an interview. “This bill is designed to make sure that local governments have data that they can use when they are trying to figure out if there’s a problem, And, if so, how to address it.”
The senator added that this bill seeks to “catch up” on addressing an issue that has been out there for a while — most notably in Hoosick Falls, where water contaminated with perfluorooctanoic acid (PFOAs) sparked a statewide water safety crisis.
Jill Witkowski Heaps, a senior attorney at Earthjustice’s Northeast office, said much of the response to PFAS has focused on cleaning drinking water at the utility-level, not addressing the source of those contaminants. This bill, she said, should answer key questions about the scope of PFAS contamination in water that have stalled federal action on the issue.
“The very first step to really stopping this cycle of PFAS contamination is requiring everyone who is using it or might be using it, or might have it in its discharge, to disclose that so we now know what the sources are, where this stuff is coming from and how it’s getting in our drinking water,” she said.
Although the measure is focused on data collection — not mandating any specific response — that is “the logical next step,” May said.

A message from 32BJ Labor Industry Cooperation Fund:
Skyrocketing hospital prices are driving health care costs to unaffordable levels, rapidly becoming a real impediment to post-COVID economic recovery, and a serious threat to the health and financial stability of workers and families. On September 22, in partnership with City & State and the 32BJ Labor Industry Cooperation Fund, the 32BJ Health Fund is hosting a forum – “Hospital Prices: the Policy and the Practical” – to discuss strategies to address hospital price increases.
Want to receive this newsletter every weekday? Subscribe to POLITICO Pro. You’ll also receive daily policy news and other intelligence you need to act on the day’s biggest stories.

EMERGENCY OVER — POLITICO’s Shannon Young: New York’s Covid-19 emergency declaration ended last week, nearly 10 months after Gov. Kathy Hochul took the executive action in an effort to curb viral transmission as coronavirus cases surged at the end of 2021. Hochul told reporters after a New York City event that she would not extend the executive order when it expired.
The governor had regularly renewed the declaration, at times with slight modifications, since first issuing it on Nov. 26. The announcement came just days after Hochul lifted the state’s mask mandate for public transit and other congregant settings in an effort to “restore some normalcy.” (Masks must still be worn in health care settings and adult care facilities, including nursing homes.)
OVERDOSE PREVENTION — POLITICO’s Julian Shen-Berro: The city may soon stock bars and other nightlife venues with life-saving opioid overdose medication. A bill passed unanimously by the City Council last week requires the Department of Health and Mental Hygiene supply free opioid “antagonist kits” — and training on how to use them — to local nightlife establishments. Those kits will include naloxone and other medications approved by New York state and the federal Food and Drug Administration to negate or neutralize the effects of an opioid overdose.
The medication can be delivered via injection or nasal spray. “It is a public health crisis. We are seeing New Yorkers die on a weekly basis,” bill sponsor Chi Ossé said of opioids as he cast his vote.
IN OTHER NEWS:
— The NYU School of Global Public Health is joining the AI4HealthyCities Health Equity Network, a global initiative to improve heart health equity in New York City. The network, created by the Novartis Foundation in partnership with Microsoft AI for Health, looks to use data science techniques to provide health officials with insights and tools to identify the root causes of heart health inequities, as well as how outcomes can be improved.
… The Novartis Foundation, Microsoft AI for Health and NYU GPH will launch AI4HealthyCities at a 5 p.m. event today, which will be streamed online.
— State Comptroller Thomas DiNapoli on Friday announced two Department of Health audits that identified millions in improper payments in the Medicaid program.
— The Cannabis Control Board will meet Tuesday in New York City. The in-person meeting comes just one week before the application deadline for New Yorkers looking to open the first marijuana dispensaries in the state.

WE LOVE TO HEAR FROM YOU: This roundup is for you! Send news tips, health tips, ideas, criticisms and corrections to [email protected].
NOW WE KNOW — An Adderall shortage and social media stigma is making it hard for some people with ADHD to access the drug, BuzzFeed News reports.
TODAY’S TIP — Want to change someone’s mind? New research suggests that a group of people having a robust conversation can help achieve consensus — as long as that group doesn’t include any “blowhards,” according to The New York Times.
MAKE SURE TO FOLLOW Shannon @ShannonYoung413 on Twitter. And for all New Jersey health news, check out Daniel Han, @danieljhan_.
STUDY THIS — Via VICE: “The American military is facing a recruiting crisis and the Dobbs v. Jackson Supreme Court decision that overturned federal protection for abortion will make it worse, according to a new study from the RAND Corporation.”

The New York Times examines “how Russian trolls helped keep the Women’s March out of lock step.”
The Times Union reports that California paid less than New York for Covid-19 rapid, at-home tests from a “company associated with Hochul campaign donors.”
“Intellia Therapeutics Inc. reported encouraging early-stage study results for its Crispr gene-editing treatments,” The Wall Street Journal reports.
Kaiser Health News breaks down “what back-to-schoolers need to know” about the return of poliovirus in the U.S.
The meth addiction crisis “is worse than ever,” STAT reports. But new treatments are on the horizon. 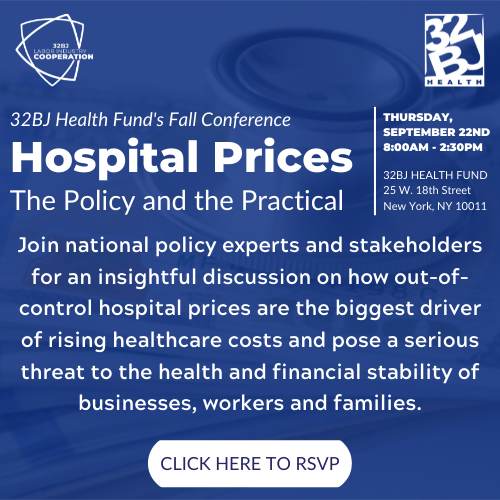 “In South America, two years of shuttered schools for kids without computers or WiFi ended hopes and dreams for millions,” Victoria Sousa, a journalist currently attending University of Pennsylvania, writes for POLITICO Magazine.
POLITICO’s Megan R. Wilson reports that the rise of profitable Medicare Advantage plans has given way to a wave of misleading or deceptive sales tactics used to push them and a massive spike in complaints from seniors who feel duped. The issue, which has long been on the radar of state and federal regulators, is now drawing the attention of top Democrats on Capitol Hill.
About half of Manhattan office workers are back at their desks on a typical weekday — but far fewer are returning to offices five days a week, according to a new survey from the Partnership for New York City, POLITICO’s Janaki Chadha reports.
POLITICO’s Ben Leonard reports that Medicare patients took advantage of pandemic-era policies permitting them to see doctors in other states via phone or video call, a study published Friday in JAMA Health Forum found.

A message from 32BJ Labor Industry Cooperation Fund:
32BJ has teamed up with the Realty Advisory Board to tackle out-of-control hospital prices that are making healthcare unaffordable for families, businesses, and local governments. Our businesses can’t bring back the jobs we lost during COVID unless we bring down rising hospital prices. We need to put an end to the hidden hospital tax on businesses that is stifling our economic recovery.
On September 22nd, join national policy experts and stakeholders for a discussion on how hospital prices are the biggest driver of rising healthcare costs and pose a serious threat to the health and financial stability of businesses, workers, and families.
Speakers include: Kyle Bragg, 32BJ SEIU; Howard Rothschild, Realty Advisory Board; Dave Chase, Health Rosetta; Vikas Saini M.D., Lown Institute; Christopher Whaley Ph.D., RAND Corporation; Vicki Veltri, Connecticut Office of Health Strategy; Chris Deacon, Versan Consulting.
Register today to join us for a stimulating day!
© 2022 POLITICO LLC